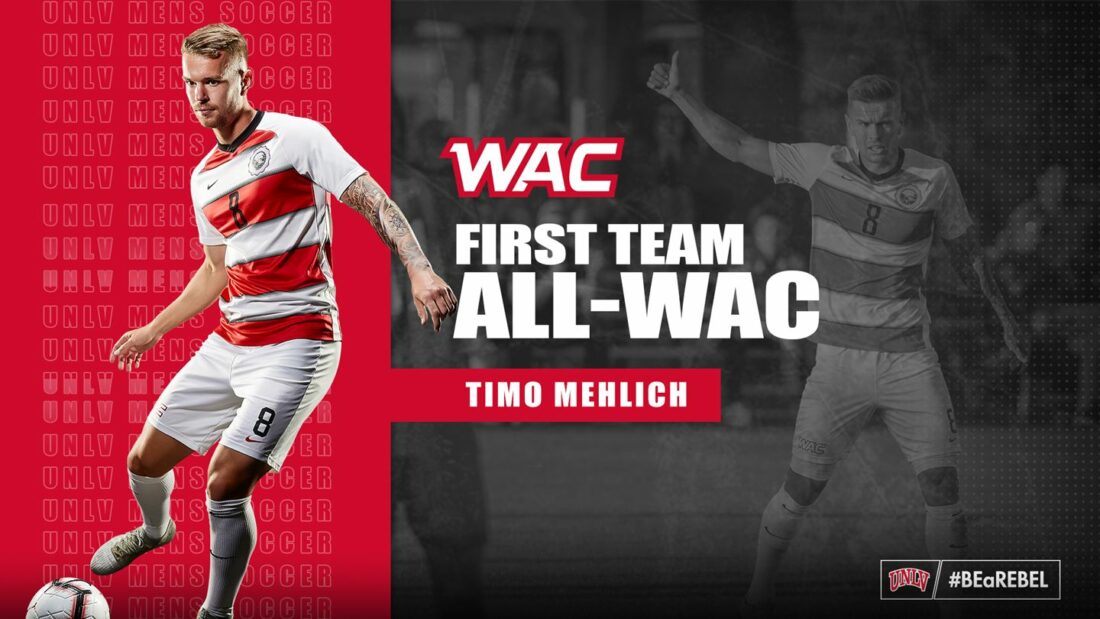 Mehlich is the first Rebel to ever earn All-WAC honors four straight years, and the first Rebel to be named all-conference four years in a row since Sal Bernal was All-MPSF in 2010 and 2011 and All-WAC in 2012 and 2013. A senior midfielder and native of Mönchengladbach, Germany, Mehlich finished third in the conference with 11 goals on the season, and was fourth in total points with 23, both team highs. He had three multi-goal games during the season, starting with two goals in a minute span in a win at Pacific that earned him WAC Player of the Week honors. Mehlich also scored twice in the second half to rally UNLV past San Jose State for a 2-1 victory, while during his first career hat trick that came in a 4-1 win over Kansas City, two of his three goals came in a 63-second span.

Jones, a junior defender from Auckland, New Zealand in his first year with the Rebels after transferring from New Mexico, earned all-league honors despite missing the first three games of the WAC season while starting for the New Zealand Olympic Qualifying Team in an Olympic Qualifier tournament in FIJI. He helped his country earn a berth in the 2020 Tokyo Olympics, then came back to the team and promptly helped them to a four-game unbeaten streak. With Jones in the lineup, the Rebels went 4-3-1 in league play, as he anchored the Rebels’ defensive backline. 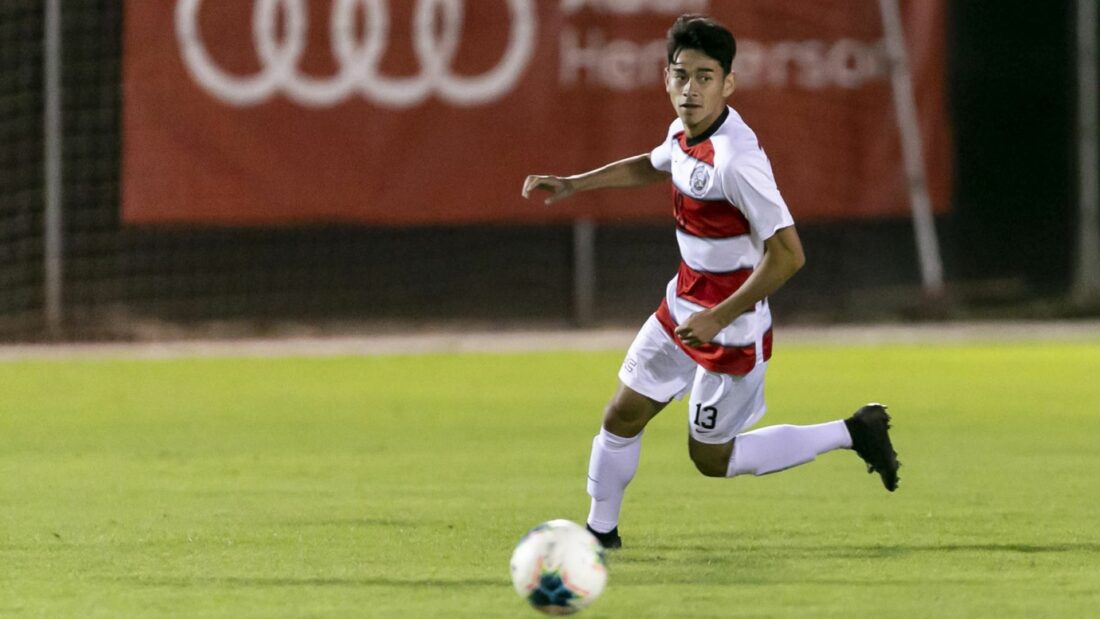 PHOENIX, Arizona (UNLVRebels.com) – UNLV freshman Skyler Goo found the perfect night for his first two career goals, as he scored a goal in each half to give the Rebels a 2-0 advantage on the way to a 2-1 win at Grand Canyon in the season finale for both teams in WAC men’s soccer action Saturday night at the GCU Stadium.

Goo, who came into the night with one assist on the season, put UNLV ahead 1-0 in the 43rd minute on just the Rebels’ second shot of the game, while classmate Hayden Prasad assisted on the score. He then added to the lead in the 69th minute with his second score, thanks to an assist from sophomore John Lynam.

The Antelopes closed within 2-1 in the 81st minute but that would be the final goal of the game. UNLV came away with the win despite having been outshot 17-5 for the game. Shots on goal however were just 6-4 in favor of GCU. 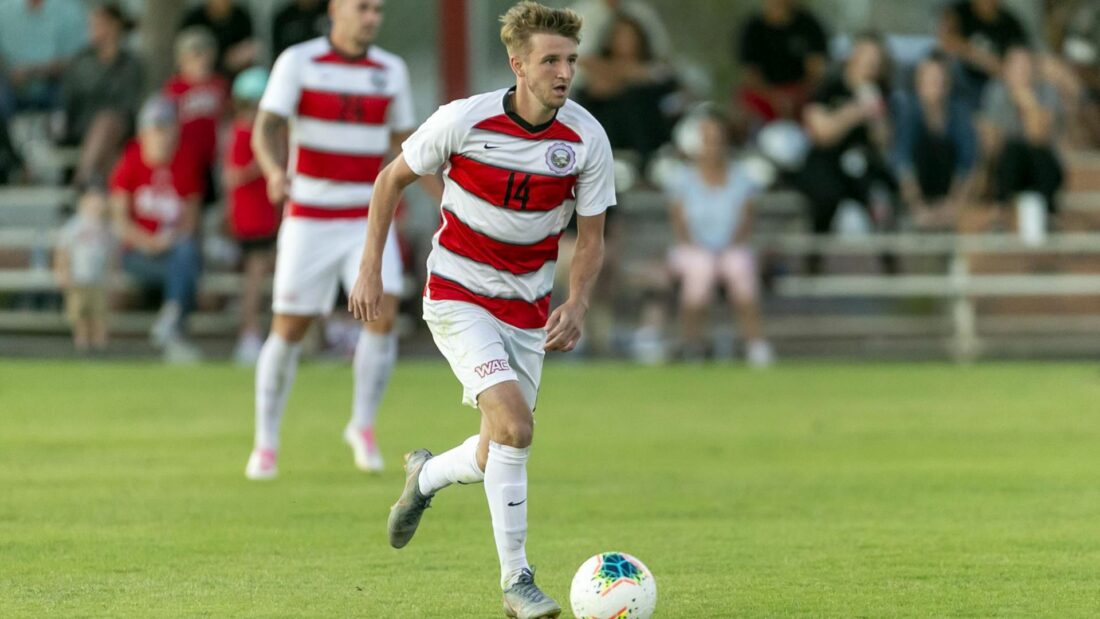 LAS VEGAS (UNLVRebels.com) – The UNLV men’s soccer team looks to close out the season on a winning note when it travels to Arizona for a Saturday night contest at Grand Canyon. The game will tip off at 6 pm at GCU Stadium.

Saturday’s game will be available to watch through the WAC Digital Network, which will have live links on UNLVRebels.com and can also be watched through the Roku, Apple TV, Fire TV and Android streaming devices. 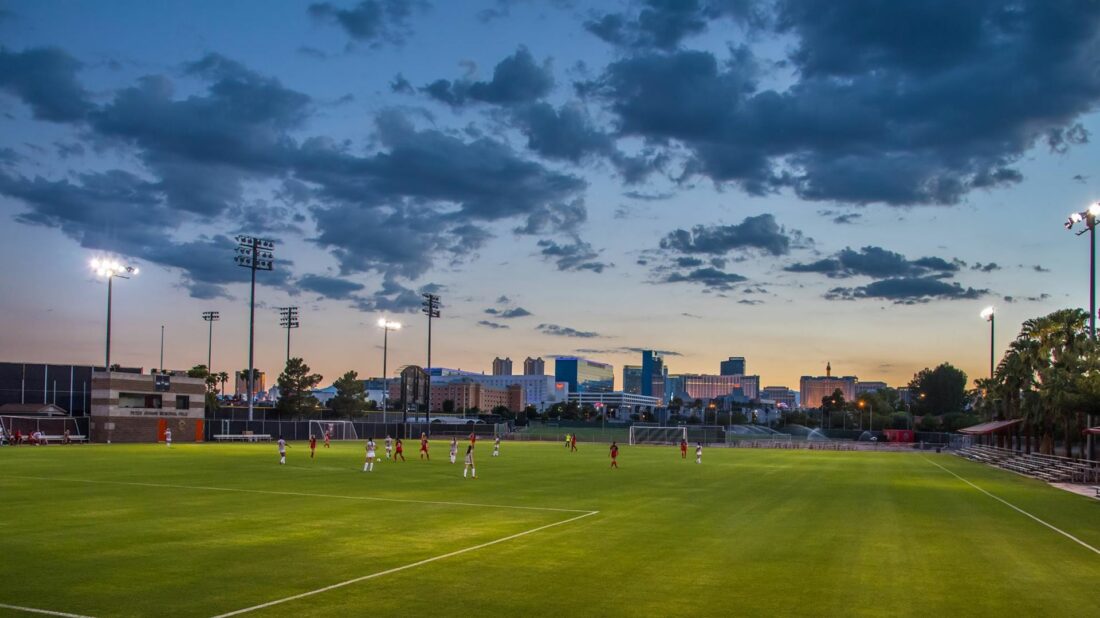 The Rebels compiled a 6-13-1 overall record during the 2019 season, including 2-8-1 in conference play. Shaw spent the last six seasons leading the program.

“We would like to thank Coach Shaw for his commitment to leading our soccer team over the last six seasons,” Reed-Francois said. “However, in evaluating the overall program, we have decided to move in a new direction.” 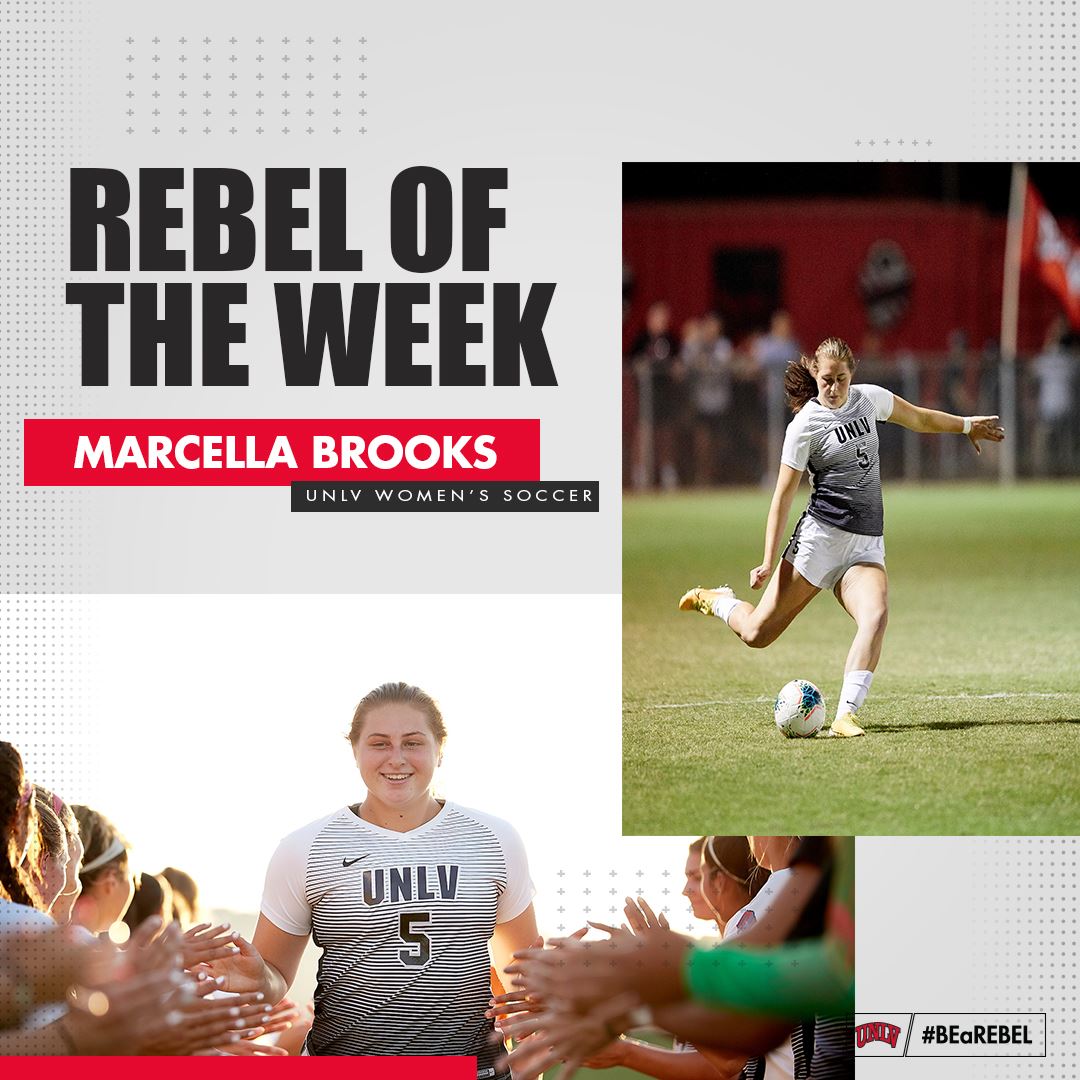 The award goes to the student-athlete(s) who turned in the best individual performance during the previous week of competition from Monday through Sunday as voted on by the UNLV Athletic Communications department. The Las Vegas native earned the weekly honors after receiving MW Defensive Player of the Week. After UNLV’s top two goalies were lost for the season with injuries, the freshman midfielder moved to goalkeeper, playing the position in a game for the first time since the age of nine. In her two games as the Rebels’ goalkeeper, Brooks recorded back-to-back shutouts in a 2-0 win over UNR and a 1-0 victory over Southern Utah. She faced nine shots and came up with five saves in two matches, including four saves against the Wolf Pack. She took almost every free kick in the two games, and recorded an assist against UNR after placing a free kick 40-yards from goal, where it was headed in for a 2-0 lead to seal the game. 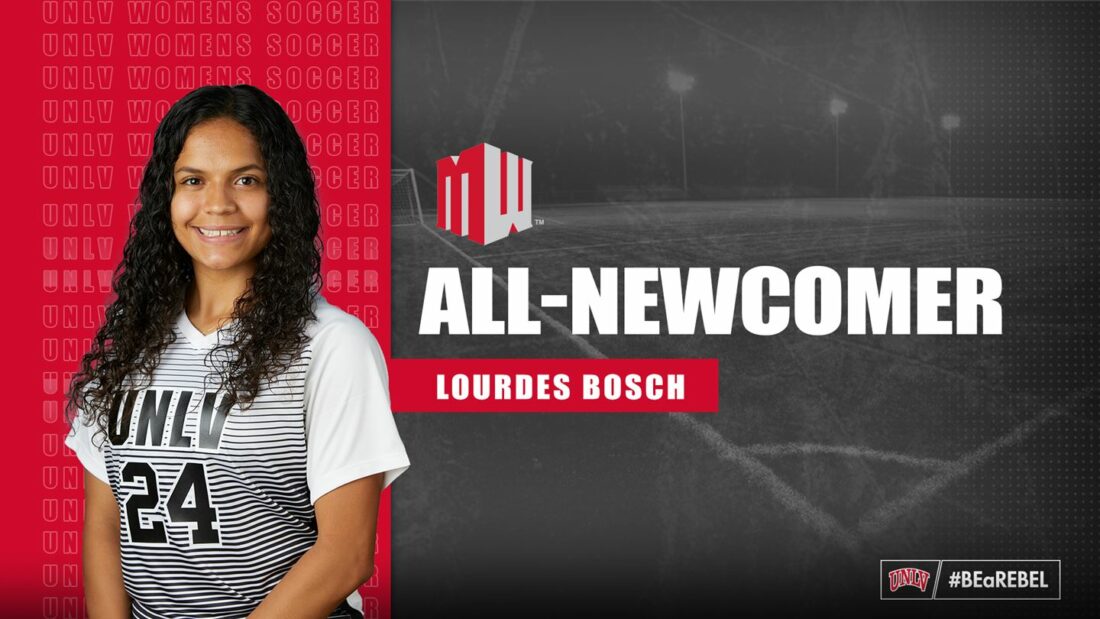 Bosch, a Las Vegas native, tied for the team lead in goals this season with four, while her eight total points ranked her third overall. Both numbers were the highest of any freshman on the Rebel squad. One of her goals in league play came in the Rebels’ 2-0 victory over Colorado College She appeared in all 11 conference games and started eight for UNLV. 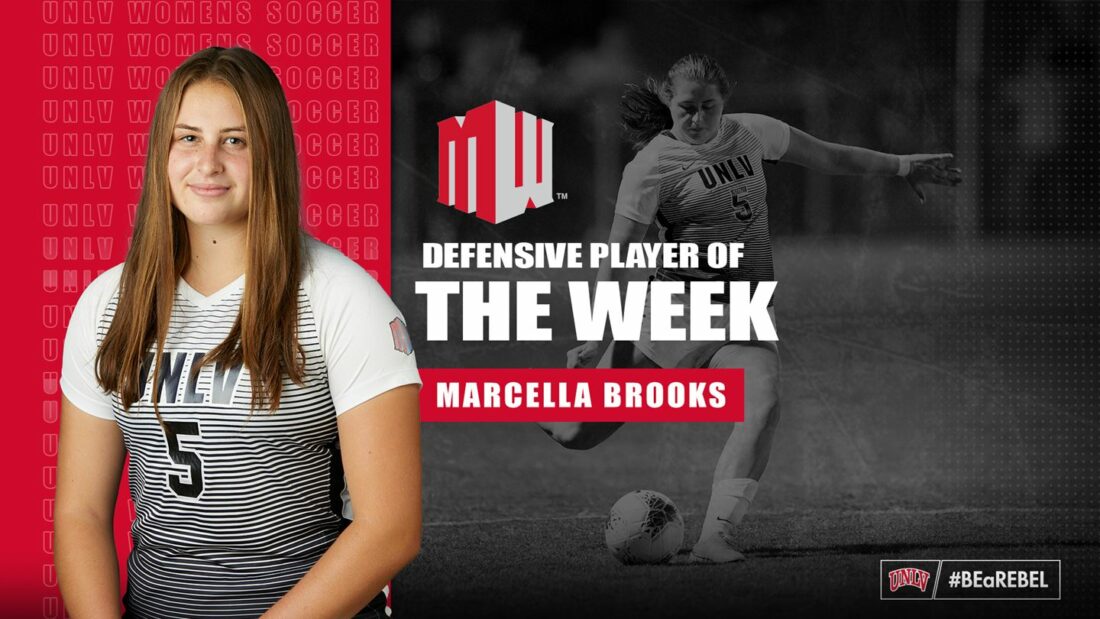 LAS VEGAS (UNLVRebels.com) – UNLV women’s soccer closed out its season on a winning note with two straight wins this weekend, and one of the key players behind those wins was honored Monday as freshman Marcella Brooks was named the Mountain West Defensive Player of the Week.

Brooks is normally a midfielder on the Rebels, but was pressed into service as the team’s starting goalkeeper after UNLV lost its top two goalkeepers to season-ending injuries the previous weekend. Playing the goalkeeper position for the first time in a game since the age of nine, Brooks played a big role in helping UNLV post a back of shutout victories, 2-0 over UNR (Nov. 1) and 1-0 over Southern Utah (Nov. 3) in the season finale. Against the Wolf Pack in a Silver State Series contest, Brooks faced nine shots and came up with her first four career saves. In the win over the SUU Thunderbirds, she was credited with one save as well.

The Las Vegas native also gave the Rebels a big weapon with her leg, as she took all of the Rebels’ free kicks in the first two-thirds of the field, sending a good number of them into the box. That included one in the 69th minute that Malika Markham headed into the box for an insurance goal to seal the 2-0 victory for UNLV, and Brooks was credited with an assist on the play. 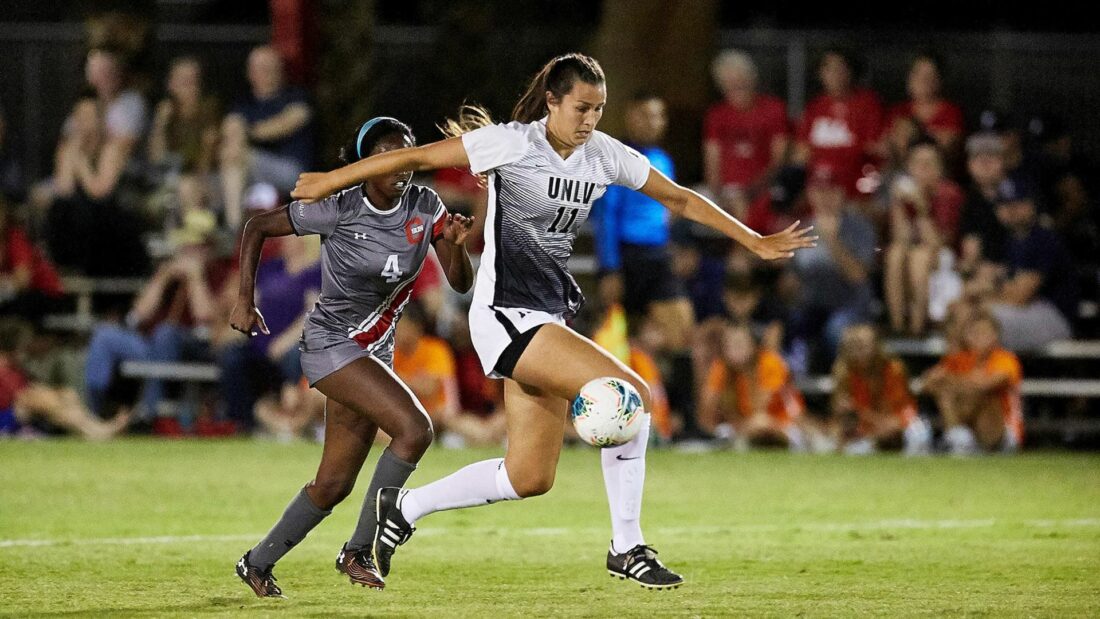 LAS VEGAS (UNLVRebels.com) – Though it didn’t show on the scoreboard, UNLV completely dominated Southern Utah Sunday afternoon in the Rebels’ 1-0 victory in women’s college soccer action from Johann Memorial Field. The Rebels closed out the regular season with back-to-back shutout victories to end the season on a winning note.

UNLV finished the game with a commanding 37-2 advantage on shots, and 20-1 on shots on goal. The Rebels also held ball possession for over 70% of the contest, but despite all the chances, could not convert a shot until the final minutes after earning a corner kick, one of 13 on the day. Katie Ballou sent her corner kick into the middle of the box where Jadyn Nogues leaped up and headed the ball into the back of the net for the score in the 86th minute.

Freshman Marcella Brooks picked up her second shutout in as many games for the Rebels, recording one save on the afternoon. 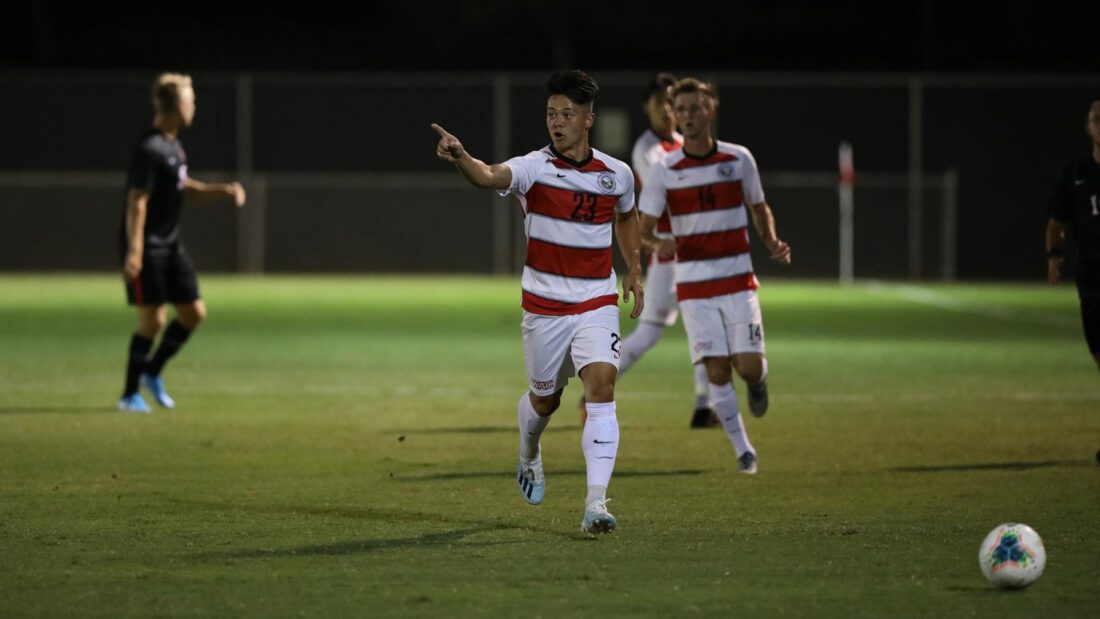 COLORADO SPRINGS, Colorado (UNLVRebels.com) – UNLV dropped a 3-2 road contest at Air Force on Saturday, as the Falcons’ Tristan Trager posted a hat trick to send the Rebels to a second straight road loss in WAC men’s soccer action from the Cadet Lacrosse Stadium. The game had been moved to the lacrosse stadium and was played on a turf field thanks to snow in the area.

Air Force went up 1-0 in the 5th minute, before Tyler Allen tied the game for the Rebels with a goal in the 28th minute. UNLV would go into halftime still tied at 1-1 despite having been outshot 10-3.

A penalty kick goal for the Falcons in the 58th minute put the hosts up 2-1, while an insurance goal was scored in the 74th minute. The Rebels did close within 3-2 in the 88th minute thanks to Timo Mehlich’s fifth goal in the past four games, but did not have enough time to find a third tying score.

NEXT UP: The Rebels will end the regular season Saturday, Nov. 9 with a 6 pm (PT) contest at Grand Canyon in Phoenix, Arizona. 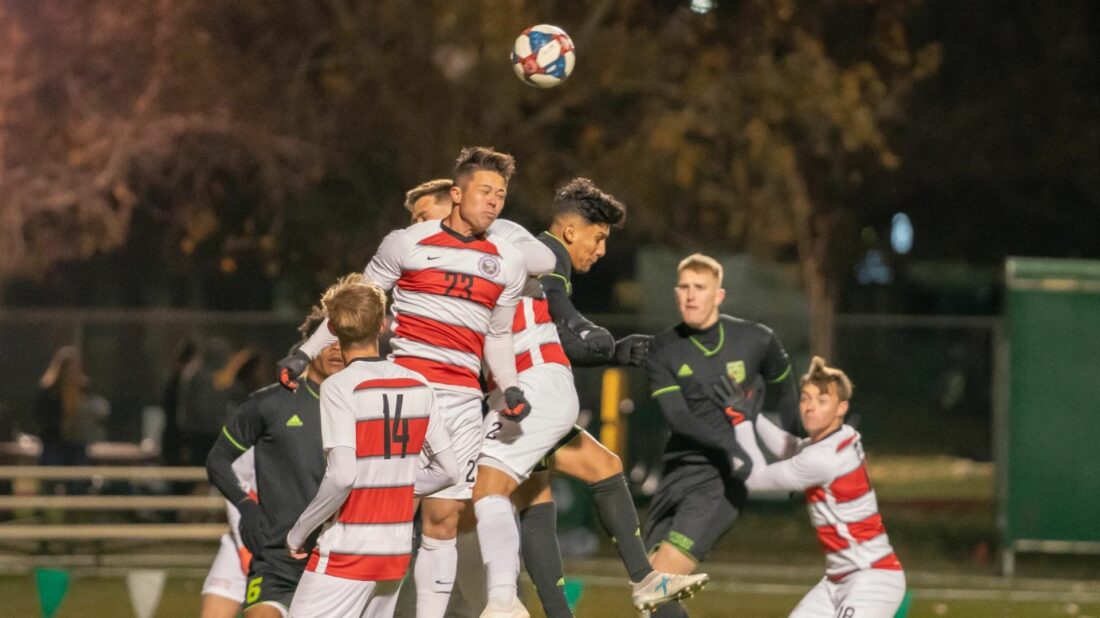 OREM, Utah (UNLVRebels.com) – UNLV fell behind early and could only manage a single goal in Thursday night’s 3-1 road loss at Utah Valley in WAC men’s soccer action. The loss dropped the Rebels to 3-5-1 in league play, likely putting them in a situation where they will need to win their last two games of the regular season to earn a spot in the seven-team WAC postseason tournament.

The Wolverines took an early 1-0 lead in the fifth minute, and would lead 2-0 at halftime after outshooting the Rebels 10-3. UNLV closed within 2-1 in the 58th minute thanks to Timo Mehlich, with his fourth goal in the past three games. That would be the lone goal for UNLV, and Utah Valley sealed the contest with a score in the 83rd minute.

NEXT UP: UNLV is off to Colorado to face the Air Force Falcons Saturday at 1 pm in Colorado Springs.