National Player Of The Week Honors For Musovski 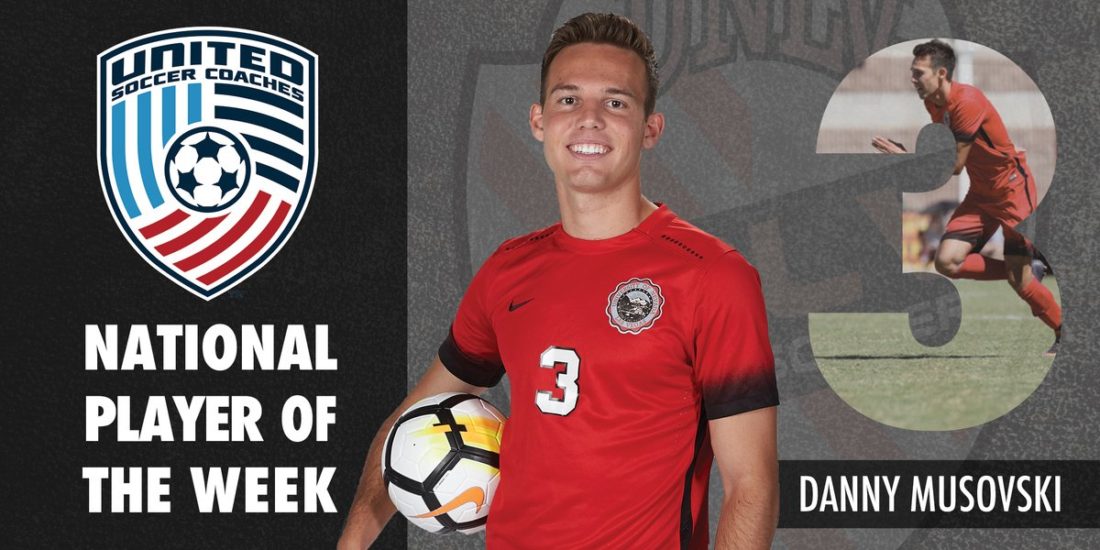 National Player Of The Week Honors For Musovski

This is the third national weekly honor of his career for the senior.

LAS VEGAS (UNLVRebels.com) – The awards keep coming for UNLV senior forward Danny Musovski following his record four-goal, nine-point performance on Sunday against Oral Roberts, as he was named the United Soccer Coaches National Player of the Week on Tuesday, marking the second time in his career he has earned the honor from the organization. His first recognition came at the end of the 2014 season, when he received the award from the then-named NSCAA after claiming WAC Tournament MVP honors. This is the third national player of the week honor of his career overall, as he was the Top Drawer Soccer Player of the Week in 2016 after against winning WAC Tournament MVP honors. The conference honored Musovski as well on Monday, as he became the first Rebel to ever win four conference Player of the Week awards in their career.

Musovski, who missed four games in the middle of September, scored a hat trick in the first half against ORU on the way to a school-record tying four goals on Sunday. That marked the first hat trick at UNLV since Aug. 31, 2014 by Sal Bernal at Bradley, while the four goals was the most since Doug Borgel had four against UC Irvine on Oct. 20, 1989. Musovski also tied the WAC mark with his four goals, while it’s the best single game goal performance in the NCAA this season thus far.

The Las Vegas native added an assist on the team’s fifth and final goal of the day, giving him a program-record tying five points, matching Borgel from the same UC Irvine contest. His nine points also set a new WAC record, and is the top NCAA point performance in 2017 as well.

In Musovski’s four full games that he has played in, the Rebels have scored a total of eight goals, and he either scored or assisted on seven of those eight goals. The scoring outbust on Sunday has Musovski moving up the career scoring lists, as he now ranks fifth at UNLV with 93 points and sixth in carer goals with 37, which also ties him atop the WAC career scoring chart.

NEXT FOR THE REBELS: The Rebels have just one game this week as they open WAC play on Thursday at 7 pm against Houston Baptist at Johann Field. The first 100 fans will also receive a free UNLV beanie, while the first 150 UNLV students (with a UNLV student ID) will receive a free BBQ sandwich from Smoke’n Sams BBQ at the concession stand. The UNLV Soccer Foundation will hold a free tailgate party before the game, with free food, drinks and music. Admission is free to all ticketed fans.