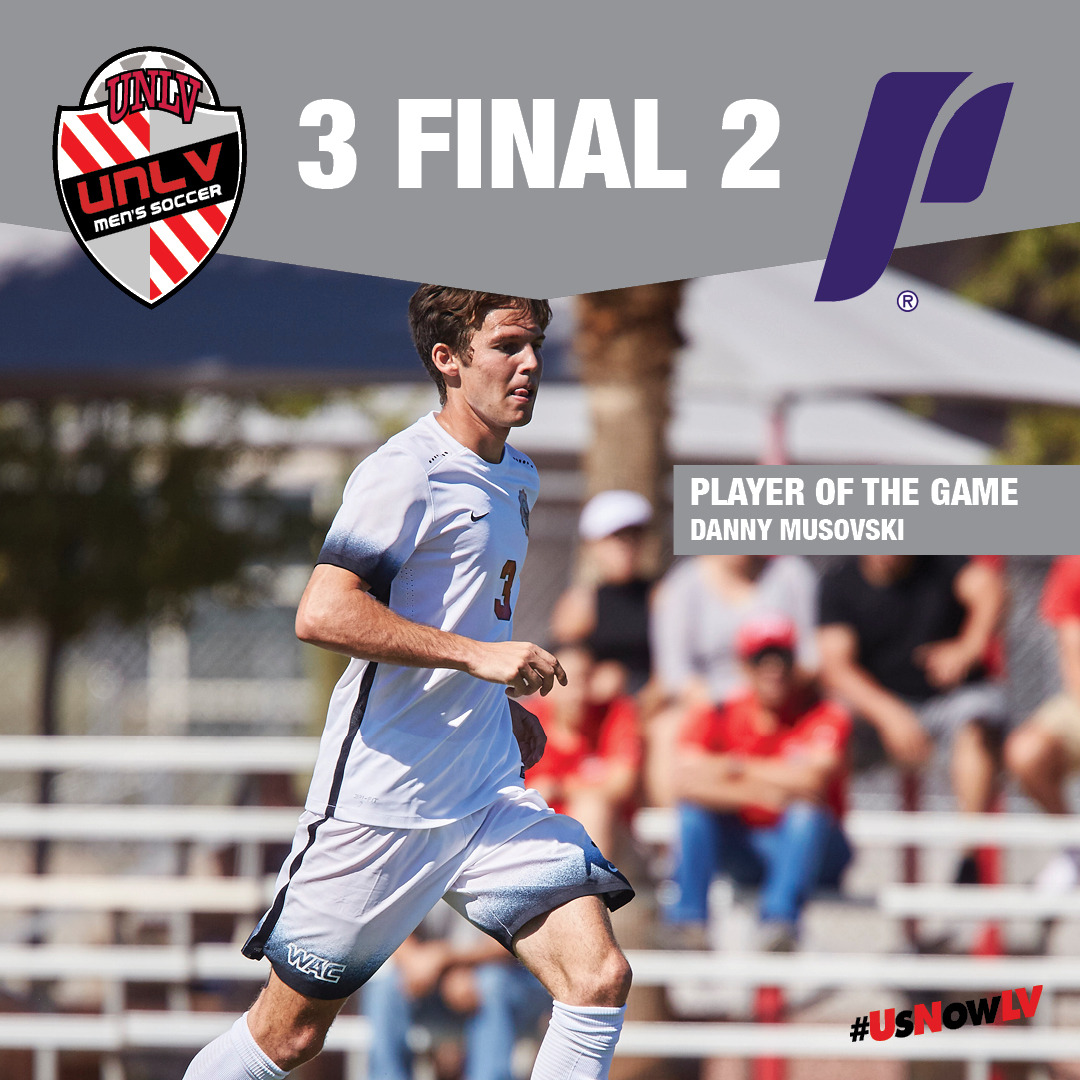 UNLV has knocked off three of its last four ranked opponents.

PORTLAND, Oregon (UNLVRebels.com) – In perhaps the most thrilling finish in UNLV men’s soccer history, the Rebels stunned 15th-ranked Portland on the road Friday night in front of a crowd of 4,385 off a golden goal with just one second left in the second overtime for a 3-2 victory in the season opener for both teams. Following a yellow card against the Pilots, Rebel goalkeeper Enrique Adame took the free kick 75 yards away from the Portland goal. The ball bounced at the top of the box, and then junior Daniel Moran slipped free and headed it in for a goal, the first of his career, at the 1:09.59 mark of the contest.

THE TURNING POINT: Portland was forced to play shorthanded from the 39th minute after Danny Musovskiwas dragged down from behind on a breakaway. The Rebels trailed 2-1 at that point, but with the Pilots down to just 10 players they could not add to their lead, allowing the comeback by UNLV.

STAT OF THE GAME: Portland had four shots on goal in the first 45 minutes, and only one total in the final 65.

REBEL OF THE GAME: Musovski showed why he’s a preseason All-American, as the senior forward scored the night’s first goal and assisted on the tying score to finish with three points, in addition to drawing the game-changing red card against the Pilots.

The Rebels tie it up at 2-2 on Spencer Jackson's sliding finish in front of the game. #UNLV (Portland Sports Network) pic.twitter.com/yVO70Plcj8

Couldn't see Daniel Moran's #UNLVRebelsSoccer #golden #goal live? No problem, we got it for you… Enjoy! #LiveStreamProblems pic.twitter.com/xMENg5C5HS

QUOTABLE: “A fantastic start to the first game of the 2017 campaign with an exciting finish in double overtime in the very last second of the game. Danny Musovski’s play in the first half was giving the defenders fits and his threatening runs to the goal really put the team off balance. This is the first time many of our players have been in front of a very intimate atmosphere of a crowd this size, and they held their composure well over the game. This is just step one in the long journey ahead, we came to win, we were fortunate to get the win, now we regroup and get ready for Oregon State on Monday.” – Head Coach Rich Ryerson.

REBEL NOTES:
* Dating back to the semifinals of the 2016 WAC Tournament, the Rebels have knocked off three of the past four ranked teams they have faced. They took down No. 23 Utah Valley 1-0 in the WAC semifinals, and followed that by topping No. 18 San Diego State in the first round of the NCAA Tournament, before falling at No. 6 Denver in the NCAA second round.
* The assist by goalkeeper Enrique Adame was the first of his career.
* Daniel Moran scored his first career game-winner, and first overall goal with the double-overtime header.
* Freshman Marco Gonzalez recorded his first career point with an assist on the night’s second goal, a sliding kick by Spencer Jackson in the 67th minute. Danny Musovski also assisted on the score.
* Musovski notched the first goal of the night when he headed in Timo Mehlich’s corner kick in the 21st minute that tied the game at 1-1. That gives the senior 33 total goals in his career.

NEXT FOR THE REBELS: UNLV will play at Oregon State on Monday, Aug. 28, at 1 pm, in a game televised by the Pac-12 Network.