Hat Trick For Gonzalez In 4-1 Win Over Evansville 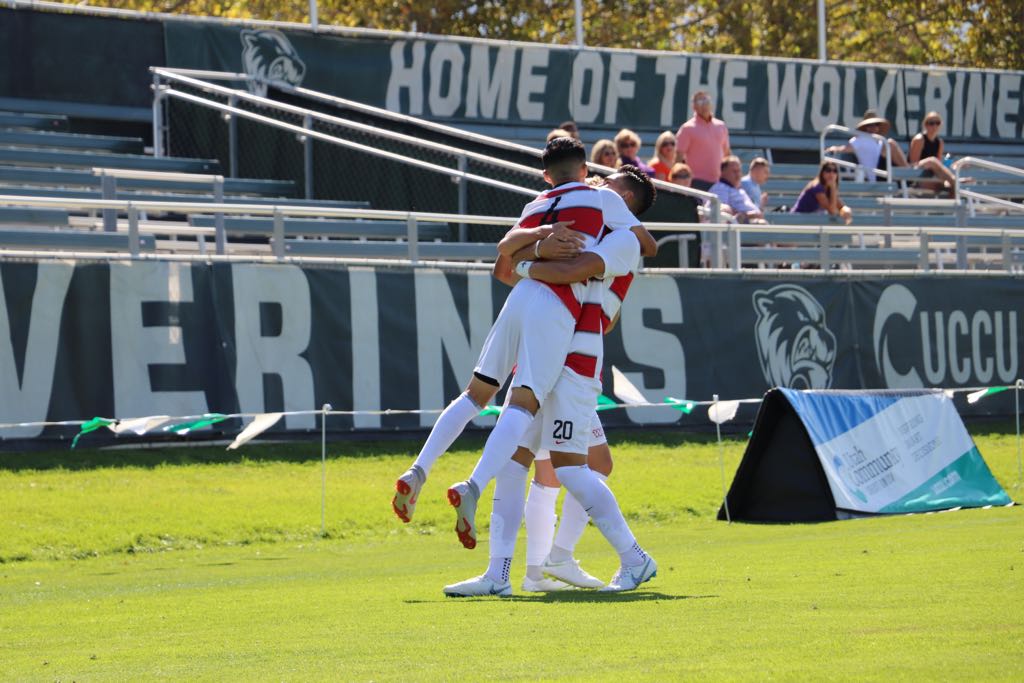 Hat Trick For Gonzalez In 4-1 Win Over Evansville

UNLV outscores its opponents 7-1 this weekend.

OREM, Utah (UNLVRebels.com) – UNLV sophomore forward Marco Gonzalez posted his first career hat trick to lead the Rebels past Evansville 4-1 Sunday morning in college men’s soccer action from Clyde Field on the Utah Valley campus. The Rebels moved to 2-0 on the year with the win, their second straight in the Utah Valley Soccer Invitational.

Gonzalez scored his first two goals exactly one minute apart in the 15th and 16th minute of the game to put the Rebels ahead 2-0 early. The Aces, who were limited to just five total shots in the game, managed to break down the Rebel defense in the 26th minute to close within 2-1. UNLV only allowed one more shot on goal the rest of the way, and posted a pair of goals after halftime for the three-goal victory.

THE TURNING POINT: With the lead at one coming out of the halftime break, the Rebels took control when Nico Clasen stole the ball at midfield and sent up a long pass on the left side to Gonzalez. The Las Vegas native raced into the box past his defender, juked out the Aces goalkeeper and dribbled to the middle of the box before easily scoring on the empty goal, making its a 3-1 Rebel advantage in the 52nd minute.

REBEL OF THE GAME: Gonzalez is already halfway to his freshman year’s goal total after his three-goal performance against Evansville. His first goal came on a chip shot over the goalkeeper from 18 yards out, and he then finished off a great cross into the box from Timo Mehlich for his second score, before adding his third score in the second half.

QUOTABLE:
“To score seven goals and only concede one, that’s a pretty good weekend. We did good things today in breaking down Evansville’s defense on the outside and in getting behind their backline. Marco (Gonzalez) showed great resilience today, a really great individual performance for him. At the same time we had a very good overall team effort, I thought to come out and play that well on a Sunday ”
– UNLV Head Coach Rich Ryerson

REBEL NOTES:
* Gonzalez posted an assist on Friday to give him seven total points for the weekend.
* Timo Mehlich closed out the scoring on the 76th minute thanks to a long pass from fellow German native Nico Clasen. It was Mehlich’s second goal of the weekend.
* Clasen picked up his first two assists of the season, coming on the third and fourth Rebel goals.
* Jordan Chavez was credited with the assist on UNLV’s first score, while Mehlich and Tyler Allen assisted on the second goal.
* Three of UNLV’s goals in the game came after a steal at midfield leading to a long pass up the field for the score.
* UNLV outscored its two opponents by a 7-1 margin this weekend, and allowed only three total shots on goal between the two games.

NEXT FOR THE REBELS: UNLV will play a third straight game away from Las Vegas when it faces the Tulsa Hurricanes Friday, Aug. 31 at 6 pm in Tulsa, Oklahoma. Tulsa will be coming into the match after claiming a 2-1 win at No. 15 Michigan and a 0-0 overtime tie at No. 4 Michigan State this weekend.